When it comes to choosing a grill, the number of burners is a highly-marketed feature that buyers look into. But while more burners can be better, the right choice depends on your needs. We’re comparing 4-burner vs 5-burner grills in this article to help you decide which one to buy.

Features of 4 Burner VS 5 Burner Grills

The main difference between a 4 burner and a 5 burner is the flexibility with temperature controls. The more burners you have, the more control you have as well.

For a 4 burner grill, you can divide it into two zones. The first zone can be the high-heat area where you’re grilling directly over the heat source. If you have kebabs, steaks, and chicken pieces, you can cook them in this zone.

The second zone can be the low-heat area for indirect grilling. This is ideal for cooking tougher meats because you’ll be able to thoroughly cook the food without the direct heat burning the outsides then leaving the center undercooked.

Then again, you can independently use each burner for a different temperature. But if you’re cooking a lot of dishes at the same time, a 5-burner grill would give you more flexibility in this aspect.

While having a high-heat and a low-heat zone, you can set the fifth burner to a different temperature as well. This would be great for any side dishes such as veggies, corn (we also have tips on how to best grill corn), potatoes, and other recipes.

Another difference between 4-burner and 5-burner grills is the cooking space. A 5-burner grill would typically give you more room than a 4-burner grill. The thing to consider here is the number of people you’re expecting to serve on a regular basis. (The amount of meat per person is a different matter.)

If you just need a mid-sized grill to serve an average party, a 4-burner grill would be sufficient.

But if you’ll be grilling steaks and burgers for a large crowd, then a 5-burner grill would be more up to the task.

So if you have a lot of people coming over for your backyard cookout, a 5 burner grill would have enough room for all the food you need to cook. But if you’re keeping your gatherings intimate with only a few people [1], then the cooking space of a 4-burner grill would be enough.

Then again, there are much larger grills that only have four burners. However, they can be more expensive. An example is the Fire Magic Echelon E1060I 4 burner grill which has 1440 square inches of total cooking surface.

Gas grills are known for being versatile. You can use it for smoking, steaming, searing, rotisserie cooking, and even baking! The number of burners can also play a role in this aspect. The more burners you have, the more recipes you can cook at the same time.

As previously mentioned, having more burners gives you more heat zones. And with this, you can divide your grill into different areas so you can cook more dishes simultaneously.

So if you’re using a 4-burner grill, you’d be able to cook two to four dishes at the same time. But of course, space will be a bit limited for each dish because the cooking area is already divided.

On the other hand, a 5-burner grill will give you the additional space you might need. Since the temperature of each burner can be controlled independently, you would have more freedom so that every meat or side dish will be cooked over its ideal temperature.

Therefore, a 5-burner grill would make it easier to whip up a four-course menu in no time. Of course, it still comes down to your preference if you even need to grill a number of recipes in one go.

Since more burners mean a larger cooking area, this would also mean a higher fuel consumption. You might want to look at the BTU rating of each burner to get an idea of how much fuel it consumes per hour.

But generally, a 5-burner grill would consume more fuel in an hour because of having an additional burner.

If you’ve decided on getting a 4 burner grill, the RCS Grill Premier RJC32AL is a great option. It has four stainless tubular burners that generate 48,000 BTUs total plus a ceramic infrared backburner that produces 12,000 BTUs.

To make grilling at night easier, this RCS Grill also has blue LED lights near the knobs and dual internal halogen lights. You won’t have a hard time navigating the grill area at night with this grill.

Grilling food for a large crowd will be effortless with this gas grill from Summerset. If you’ve set your heart on a 5 burner grill, this ticks all the boxes.

Made of corrosion-resistant #443 stainless steel, the Sizzler Pro Siz40 will be able to withstand the elements it’s exposed to in your backyard. Its main burners generate 70,000 BTUs, while the infrared back burner produces 15,000 BTUs.

It also offers a generous cooking space of 985 square inches, perfect for feeding a large hungry crowd. With heat zone separators in place, each dish will be cooked in ideal heat.

Other features include LED front panel lighting, a double-lined hood, a flame-thrower ignition, a built-in temperature gauge, and an easy-clean briquette system. 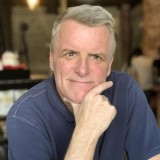